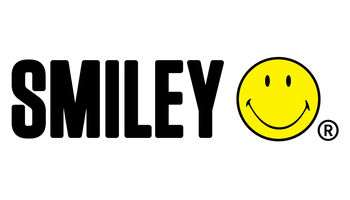 The yellow smiley does not need an introduction. It is an icon in itself – one that has resonance across all categories of consumers. It has been built on the concept of self-expression – a universal language of communication. We call it “social currency” – as the entire world uses smiley to express themselves on social media. “Lol” has been replaced with

and “I am Angry” has been replaced with

Smiley first came about in 1972 when a young journalist Franklyn Loufrani wanted to spread a little happiness in a time when bad news seemed to prevail. On New Year’s Day, French newspaper France Soir printed a Smiley logo next to all positive news stories. The idea became such a huge hit that people started buying the newspaper more, looking for the now iconic smiley, which would lead them to the ‘good news’. Before long, the promotion gained traction and an icon and brand was born.

When Franklin’s son, Nicolas Loufrani came on board 20 years ago, he looked at the logo – which he had been seeing his entire life – and realised that he wanted to bring in something different, something new. He started changing expressions; brought in different emotions which later became emoticons and the rest as they say is history.

The Smiley icon is one of the biggest phenomena in digital history !

For over 45 years, The Smiley Company has shaped the way we share happiness and express ourselves through iconic products found all over the world. From upscale capsule collaborations with iconic couture houses to limited edition products with the world’s leading hipster streetwear brands – Smiley brand collaborations continue to captivate reative directors, buyers and fashion press the world over. So, what makes Smiley apart from the rest of the market? It is the brands unique positioning at the epicentre of three major trends in society today: Happiness, emoticons and fun.

Today, The Smiley Company is present globally in almost 200 countries. It boasts of collaborating with some of the largest retail groups in the world and categories ranging from food, home décor, gifting, stationery, publishing and toys. The Smiley brand has a major licensing program which generated US $400 million in 2017. No wonder it’s one of the top 100 licensors globally and has won numerous awards including the Best Corporate Brand, Fashion & Lifestyle Program of the Year at the 2017 LIMA awards in Hong Kong.

We at Dream Theatre were quick to realize the power of the brand and it’s potential in India. We also wanted to spread the brand message – happiness and fun to the Indian consumers. We worked together with Smiley – each one bringing in their own values, their own abilities and their own thinking to come up with a product that will be the best possible product for consumers. Smiley brings a smile to the faces of consumers at retail, and we at Dream Theatre are helping big brands reach their customers in exciting ways.

Smiley launched its first apparel collection for women in India with ONLY (Bestseller). Such was the pull of the brand Smiley that the collection got sold in record time. There was no looking back after that. We successfully partnered with Krupa Industries, one of the largest BTS players in India to launch lunch boxes, pencil boxes, water bottles etc. for kids. Followed by Ultra, one of the largest soft toy manufacturers to launch Smiley plush & school bags. We also partnered with Simba, one of the largest kid’s bags manufacturers to launch a kids’ line. The positivity of Smiley’s brand appeals to both parents and children.

Available in-store and online, this trendy line has been created especially for children.

FMCG has been our strength in licensing and we successfully leveraged our relationship with Mondelez to launch a Smiley promotion – an on-pack and in-pack promotion for their popular candy brands Lickables and Gems. The campaign launched in September and offers Cadbury’s customers the chance to collect 16 mini Smiley toys including fidget spinners, phone stands, puzzles, mazes and stamps, as well as enjoying a selection of Cadbury’s products that feature a range of the iconic Smiley emoticons on their packaging. The promotion will be supported by TV advertising campaign and we will be replicating the promotion in additional territories, including Indonesia, Malaysia and the Philippines. Working with Mondelez is not just building brand awareness; it’s allowing us to create integrated marketing experiences for both retail and online.

In India, Smiley is also present in Lifestyle department stores for many years now, where they cater to men, women and children. This range offers colours, and choice of the messages relevant to local consumers, providing buyers with the best of both worlds. Smiley is also present in Archies and our offerings include greeting cards which create the buzz among the young audiences – teenagers and young adults. They’re happy, fun and cool.

The above partnerships showcases yet another great story of how when you work with Smiley – you don’t just get trend led, best-selling collections, but also an incredibly positive marketing message to create meaningful and memorable customer experiences that consumers want to share. They are going to further spread our message of bringing happiness and positive values and spread smiles. Smiley increases purchase intent and improves on-shelf stand amongst consumers. As a result more brands are turning to Smiley in order to leverage not just our authentic position, but also our positive marketing message and directory of thousands of trademarked Smiley icons.

Trends may come and go, but the Smiley face is clearly here to stay. Its transition from being an emotion to being an Emoticon is truly phenomenal. Smiley has been setting trends and has always been at the forefront of popular culture. Now four decades later, Smiley has become more than just an icon, a brand and a lifestyle: it is now a spirit and a philosophy, reminding people just how powerful a sunny smile can be!