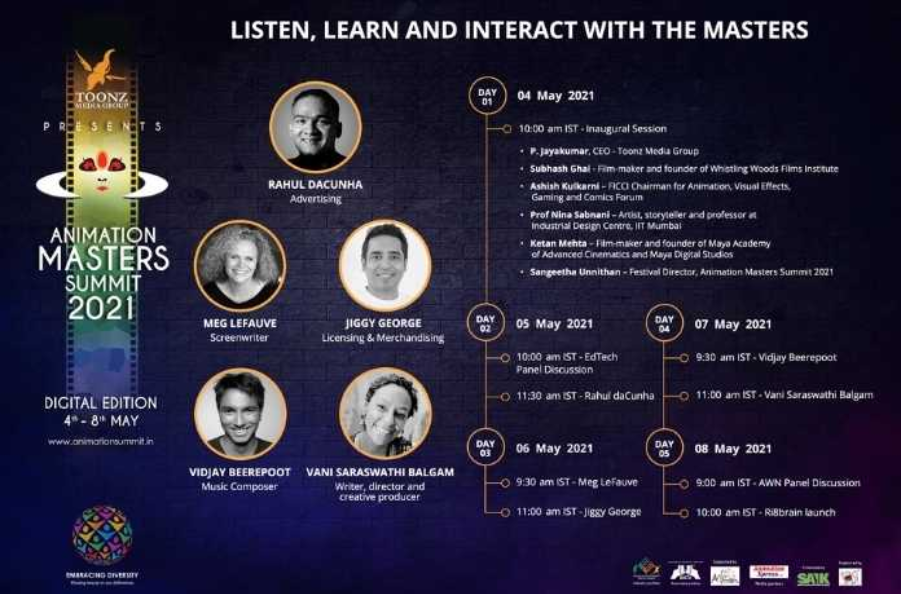 Masters of animation industry will share their thoughts and speak their mind out at the 2021 edition of Animation Masters Summit.

Oscar nominated, Annie Award-winning screenplay writer Meg LeFauve holds the writing credits for some of the most popular animation features of our times. Marvel’s blockbuster Captain Marvel, Pixar hits Inside Out and The Good Dinosaur to name just a few.

Meg began her film career as a producer and President of Egg Pictures, where she produced Emmy and Golden Globe nominated films. A storyteller par excellence, Meg has taught at the American Film Institute and served as co-chair of the Graduate Producers Program at University of California’s School of Film and Television, where she taught master level story and development classes for several years.

Vidjay Beerpoot is the man behind the soulful score of the new animation feature Ainbo and the edgy soundscape of Netflix’s The Little Vampire 3D.

Adopted from India and brought up in the Netherlands, Vidjay has gone through an interesting creative journey through different cultures all the way to Hollywood. Today, based in Los Angeles, he composes music for movies, TV shows and video games all over the world, including for Disney, Netflix, Universal Pictures, Warner Brothers, Sony and Nickelodeon.

Jiggy George began his career as a designer and then went on to work with some of the top media and entertainment brands, right from MTV and Pogo to Viacom and Times of India.

Throughout his career, Jiggy George deftly balanced the ‘ying’ and ‘yang’ of creativity and commerce, achieving what very few in the industry can boast of – an undying passion for creativity, coupled with a nuanced understanding of management. Today, Jiggy is a successful entrepreneur and founder of Dream Theatre, one of India’s leading brand management and licensing companies.

From award-winning commercials to the country’s longest running ad campaign, ad man Rahul daCunha’s portfolio is formidable, to say the least. Working with some of the biggest and oldest brands in India, Rahul mastered the art of snugly positioning brands in the public psyche through immensely relatable, riveting campaigns.

Most notable being the campaign for Amul, widely adored for its subtle, superbly-timed social commentary. But advertising is only one side of this creative genius. As a theatre artist, Rahul has worked on some avant-garde productions as a director and playwright. His plays have travelled across the world from Australia to USA.

Vani Saraswathi Balgam started associating with the animation industry at a time when the rest of us would have just started watching animation. Thanks to her dad, who started an independent 2D animation studio out of their home, Vani grew up in an exhilarating creative environment throughout her childhood.

Starting with painting, photography and amateur film-making as a teenager, she went on to establish a successful career in animation. She worked as the Head of Creative Management for DreamWorks Animation in Shanghai and as Executive Director of Rhythm & Hues studio in India. She managed the teams of artists and technicians that created the VFX and digital characters in Academy Award- winning movies like Life of Pi, The Golden Compass and The Chronicles of Narnia.

Organised by Toonz Media Group, the virtual Summit will be held from May 4 to 8, 2021, over the Zoom platform.

At the inaugural session, the welcome speech will be delivered by P Jayakumar, CEO, Toonz Media Group. This will be followed by a keynote address by filmmaker and founder of Whistling Woods Films Institute Subash Ghai.

On Day 2, the Ed Tech panel discussion to start at 10 am IST will have Ashish Kulkarni as moderator. The panelists are Dhimant Vyas, Chief Creative Director, Byjus, Dr M Srinivasan, Founder, GEAR Foundation, Prerna Jhunjhunwala, Founder, Little Paddington and Creative Galileo and Sasikumar Pillai, Executive Director, Toonz Education Services. From 11.30, there will be an in conversation session with Rahul daCunha.

While Day 3 will have an in conversation session with MegLeFauve and session by Jiggy George, Day 4 will have sessions by Vidjay Beerepoot and Vani Saraswathi Balgam.

On the last day of the summit, there will be an AWN panel discussion. Dan Sarto will be the moderator, and Monica Lago Kaytis, Co-Founder, Rise Up Animation, Bryan Dimas, LatinX in Animation, LXiA Co-Founder and Co-Director, Jinko Gotoh, Vice President, Women in Animation and Mansi Darbar-VP, Corporate Strategy and Development, IN10 Media will be the panelists. This will be followed by Ri8brain launch.

Animation Masters Summit celebrates the beautiful art of animation, bringing talents and experts from around the global animation Industry to interact with aspiring young talents. The event also offers a platform for masters to offer inspirations and insights on what it takes to create, connect and drive engaging content in this invigorating new entertainment era.