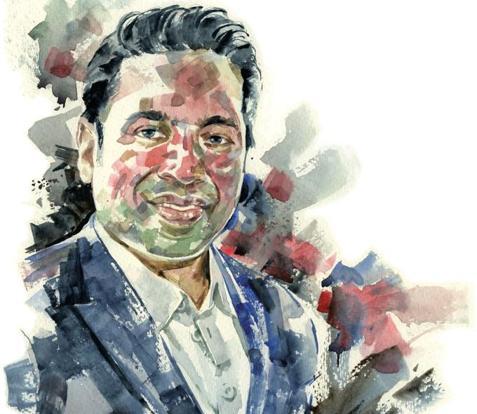 Jiggy George, founder of Dream Theatre, India’s first independent licensing representation agency, has worn a lot of different hats over the years. He’s been a fashion designer, music critic, advertising salesman and marketer before making the move into entrepreneurship. But it turns out the first job he ever wanted to do involved selling tickets on a crowded BEST bus.

“I was always interested in the idea of management, and I was just really impressed with someone who had so much control over the chaos of a Bombay bus,” says the 47-year-old, leaning back in his chair. It’s a late Monday evening and we’re meeting at his office in Santacruz West, Mumbai.

George laughs as he remembers his childhood ambitions. “It was this balance that I thought was so cool, making sure everyone was seated and also taking their money.”

Books line the wall opposite his desk, which also features a mural depicting many of his major influences, including The Beatles, Muhammad Ali and Shah Rukh Khan. Hanging on the wall behind him are two paintings by a friend which, he says, represent his personal journey towards becoming an entrepreneur (the paintings feature two important dates—when he quit and when DT officially started).

The son of a government prosecutor and a homemaker, George grew up in a traditional and regimented Malayali Christian household in Mumbai. Everyone in the family was either a doctor, engineer or a lawyer, and it was expected that George, who studied at St Stanislaus High School in Bandra, would follow a similar career path.

But he had other ideas. After completing his bachelor’s degree in sociology and economics at Mumbai’s Elphinstone College, George decided to see if his skills as a writer and an artist could translate into a creative career. In 1991, he applied for a position as a junior fashion designer at apparel brand Zodiac. “I didn’t have a degree in fashion, but I could draw fairly well,” he says. “So I went with a sketchbook full of drawings to this very serious interview about fashion design. I got the job, but it took me a few months to realize that was because they were just being nice.”

Fashion, it turned out, was not George’s calling. During his nine months at Zodiac, all he designed was men’s socks. He then joined The Times of India’s (TOI’s) ad sales team. But even here, convinced that he could do a better job than the writers on the media company’s payroll, he talked his way into being allowed to review books and music for TOI’s supplements, Metropolis On Saturday and the Independent.

In 1995, George enrolled for an MBA at the Welingkar Institute of Management Development and Research, thinking it would allow him to leapfrog a few steps up the corporate ladder. The plan was to get a job in a media or entertainment company when he graduated, but there was one problem. No media company turned up for the campus placement event.

“So I found the phone number for the then managing director of MTV, Sunil Lalla, and called him up,” he says. “I said ‘Sunil, you don’t know me but if you meet me, you’ll hire me on the spot.’ He was in one of his indulgent moods so he called me to the office and patiently listened to my long monologue on what I thought they should be doing.”

A week later, George had an offer letter. At MTV India, he joined the consumer marketing department as marketing coordinator where he worked on the channel’s on-ground campaigns, including the MTV VJ Hunt in 1999 and an attempt to get into the Guinness Book Of World Records by hosting the longest ever dance party.

A couple of years in, the higher-ups asked him to look into setting up a merchandising and licensing vertical for MTV. George jumped at the opportunity. “I thought that this was a new business in a new industry, so I’d get to learn a lot of valuable stuff,” he says. “And MTV was a really aspirational brand at the time, so I thought it would be easier to bring them into the lifestyle of young people.”

His work for MTV, which included an MTV branded credit card with Citibank and an apparel licensing deal, caught the attention of Cartoon Network, which hired him in 2002. Here, he got a chance to play with some of the biggest characters in the world, including the Powerpuff Girls, Dexter, Johnny Bravo and the Hanna-Barbera roster. George and his team pioneered the idea of promotional licensing in the country and set up the consumer products programme for Cartoon Network in India in 2006. He was also involved in a short-lived project to set up Cartoon Network theme parks in India, as well as their joint venture with Sesame Street. “My sense of getting bored easily, coupled with the very entrepreneurial spirit at Turner at that time, allowed me the latitude to do a lot of different stuff,” he says. “And that really fuelled my entrepreneurial dreams again.”

George’s love affair with entrepreneurship dates back to Bon Jovi’s Mumbai concert in 1995, organized by his elder brother Joji. “One day, he decided that he was going to bring Bon Jovi down and I thought it was just a crazy idea,” remembers George. “But he managed to pull it off. It was amazing to see that gig come together and I remember thinking, ‘man, you can dream something big and make it happen’.”

In 2009, as he completed his seventh year at Turner, he realized that he was running out of time. His wife was pregnant, he was struggling with ennui and if he didn’t take the plunge now, he never would. So he quit. “I told my team first and they turned around and said, ‘we’re coming with you’,” he remembers. “It ended up being this Jerry Maguire moment, people just started putting in their papers.”

Five members of his team left with him, and together they started Dream Theatre out of a Bandra coffee shop in 2010. A couple of his former clients at Turner came with him, but the first year or so were still very rough. People he had worked with for years would suddenly not take his calls and prospective clients would not take them seriously because they couldn’t afford an office. “But there were also a whole bunch of people who were exceptionally supportive in this journey,” he says. “And I was really lucky that the guys who came with me are far more nimble than I was in moulding themselves into the entrepreneurship role.”

Today, Dream Theatre is a premier independent agency in a billion-dollar industry that is expected to grow at an exponential rate. They have partnered with everyone from Angry Birds, Candy Crush, Dreamworks, Fifa and Real Madrid. They also have a presence in the content licensing and syndication space, where they work with Disney, Turner and Viacom. Along the way, they also expanded into the merchandising business. But George says this is just the tip of the iceberg. “We have a vibrant entertainment economy and a large consuming class, what’s not happening is retail intersecting with licensing in the most meaningful way,” he says. “That will change as organized retail grows. The next 5-10 years are going to be really important.”

Earlier this year, George—along with Kwan entertainment—launched Mojostar, a new joint venture that aims to create new celebrity-led brands in white spaces. They have already launched fitness apparel brands with actors Jacqueline Fernandez and Tiger Shroff, and there’s a lot more in the works. “It’s a lot like the early days of Dream Theatre, but this time we started with seed money and a valuation as high as $10 million,” he says. “That’s a big validation of the concept we’re built around.”

When he’s not busy running two companies, George tries to balance his many other interests. Fitness and meditation are an integral part of his day, even though he claims to hate exercise. “I do it just for one reason,” he says. “I should be physically and mentally fitter than all the young guys coming into my office.”

He’s also an avid reader (“I read The English Patient again and again”) and a long-time music aficionado who plays the guitar. He says that if he didn’t enter the corporate world, he would probably have been a writer who played music on the side. Perhaps that’s why he spends his weekends pushing his nine-year-old daughter to learn how to read music and play the piano.

“I’m very Chinese dad about it,” he jokes. “I also want her to learn Indian classical music. (That and reading music) are the only two skills that I wish I had, possibly my only regret. I wonder what would have happened if I’d trained in music earlier in life,” he adds.